I did it! I can hardly believe it sometimes, but I did it! 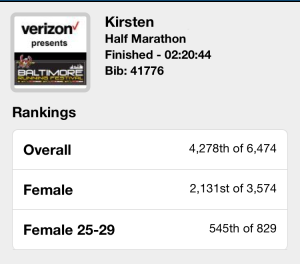 I went into the Charles St. 12 thinking it was going to be really difficult. I was told that it’s advertised as a downhill race, but it’s got rolling hills, and it would be hard. If you recall from my post about that race, I finished and felt AWESOME. I felt like a full marathon would be great! (Crazy talk)  This race, I was told was going to be hard. Lots of hills. So cocky me thought, “well, the Charles St. 12 was more hills than I expected, and I felt great, so this will be fiiiiiine!” HA. Yeah. Not the case. The Baltimore Half felt like it was mostly uphill. There was one really nice long downhill about 2 miles in. But otherwise, it was mostly uphill. It was hard. 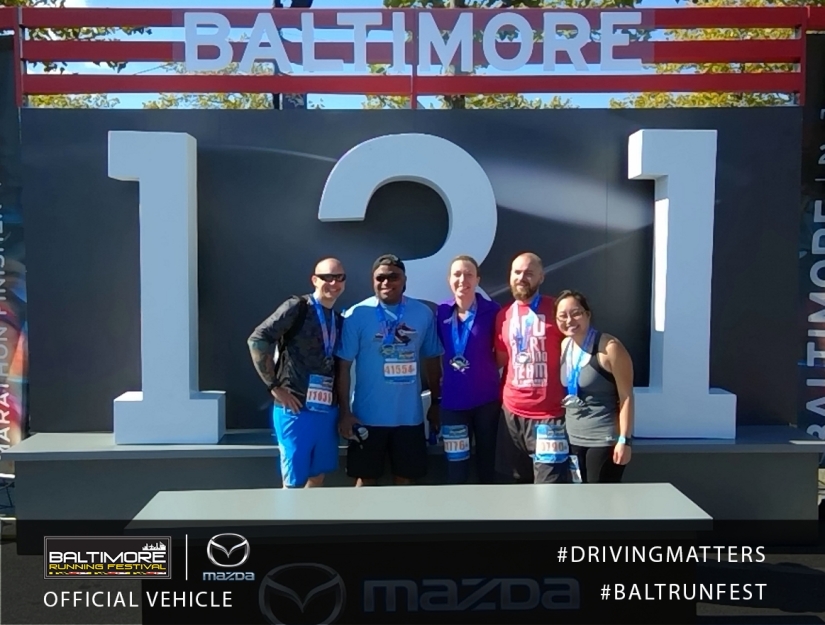 A huuuuuuge shout out to my coach for training me to run this distance, as well as the awesome people in these photos.  They were crazy enough to listen to me and run this race with me, and for that, I am beyond thankful.

Right now, when I start thinking about doing it again, I’m telling myself no. It was on my list to do it once, but I don’t think I need to do this race again. The distance was hard, but I could do it again. But this race in particular was really hard. I don’t think I need to do the Baltimore Half Marathon again. I keep saying this… because while I say this now because I’m afraid I’ll change my mind next year.  I need someone to remind me of this next year when it comes around again!! I’m thinking I could do the relay – much more manageable to do 6-7 miles with hills. So we’ll see.

8 months ago, I posted here to say that I added a goal to my New Year’s Goals list. And last Saturday, I crossed that goal off my list. I am someone who LOVES making lists and crossing things off said list. It gives me such a feeling of accomplishment. I’m one of those people who will add something trivial to the end of a list too, just to cross if off, if I’m feeling particularly unproductive. Yup. Let me tell you – crossing “Run the Baltimore Running Festival Half Marathon” off my list was one of the coolest feelings I’ve had this year.   To quote my post from 8 months ago, and to put this into context again for you,

The girl who abhorred running for 2/3rds of her life just said she is going to start training to run a half marathon.

Yeah. To me, this was so huge! I still am in a little bit of shock I did it.

Also, after crossing it off my list, I got to do this:

I’d be lying if I didn’t say this was a part of why I ran it in the first place.

For the rest of the year, I’m sticking with fun runs and 10ks. Because who doesn’t love a good fun run?! I’ll be running in the Orioles Trick or Trot 5k again this year, and since the Festival of Lights run is back (as a 5k!), I’ll be doing that too!!

Anyone else out there run a marathon or half marathon this month? Cross any goals off your New Year’s Resolution/Goal List?!

View all posts by Kirsten

My favorite race of the year, the #wineglasshalfmarathon, is tomorrow! So here’s my #flatKirsten. Showing some Maryland pride - already seen some other Charm City Run folks here for the race!! Wish me luck and warmth with a 39 degree prediction for the start tomorrow morning! 🥶
I can’t believe I nearly forgot to post my #flatKirsten before the #CharlesSt12 tomorrow!! Excited to run this race, for the 6th time, 5th time as part of the B3. 🎉 Good luck runners!
Better late than never! Another #flatkirsten this week for the #soleofthecity10k! Should be a lovely day, for one of my favorite spring races! Run fast friends!!
A late night #flatkirsten the night before the 🌸#cherryblossom10miler! 🌸 I’m very excited because I signed up for this run in 2020, and I finally get to run it! Wish me luck and that it won’t be too windy!