So week 2 has been even better than week 1 was. I realized that the problem I had last week with running was in fact, a problem of not enough fuel. I went running on Wednesday night, and had more fuel to prepare for it. 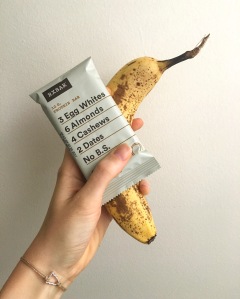 These RxBars are awesome – most of them are compliant for Whole30, and they are super tasty.  In addition to eating this beforehand, I also carried a small baggie of dates to have as some fuel at the halfway point.  It was a perfect snack!  And I really needed it too – as I was slightly dizzy when we stopped.  Eating the dates and drinking some water fixed that quickly.  I’m still learning how to eat on Whole30 and run these distances – I know that this is only 30 days, and I’m trying to listen to my body as I make these adjustments.

Fuel is a huge factor on how you perform athletically. I knew this, but I didn’t realize how much it made a difference. This is also something that varies from person to person. But my general advice on pre-workout fuel is this: whole nuts aren’t great, but nut butters are. If you have some fruit, try to have some fat (like nut butters) with it, so your sugar levels don’t spike and end with a crash. I liked yogurt, but some people can’t do dairy before running.  Some people like to have a bagel with some cream cheese.  The best fuel for me, prior to Whole30, was a gluten-free waffle topped with a nut butter and some fresh fruit, usually blueberries (or jam, if I didn’t have any fresh fruit).

I have also learned that not only does it matter what you have 30-60 minutes before you exercise, but you should also be aware of what you eat the night before a workout. On Whole30, you can’t have grains which is usually what runners depend on to give them energy that will last through a long workout. The morning I felt terrible, I hadn’t eaten a big dinner, and went to sleep a little hungry.  That’s a big problem.  Now, instead, I’m using squash and sweet potatoes to fill up and prepare me for the long runs for the carbs needed that you usually get from grains.

View all posts by Kirsten

Better late than never! Another #flatkirsten this week for the #soleofthecity10k! Should be a lovely day, for one of my favorite spring races! Run fast friends!!
A late night #flatkirsten the night before the 🌸#cherryblossom10miler! 🌸 I’m very excited because I signed up for this run in 2020, and I finally get to run it! Wish me luck and that it won’t be too windy!
Last minute post for my #flatKirsten for the #littlepaxriverrun tomorrow - wish me luck with the below freezing temps! 2 years ago, this was the last race I did before the world shut down, and I’m excited to be doing it again with the same friends as last time (and some more!) Wearing the same shoes as last time too - hopefully that gives me the same luck as last time, not falling in the mud.
Late in the day, but here’s my #flatKirsten for the #soleofthecity10k race tomorrow! Gonna be all decked out in my #charmcityrun gear. Excited to be able to do this race, as it was postponed from April. Wish me luck!